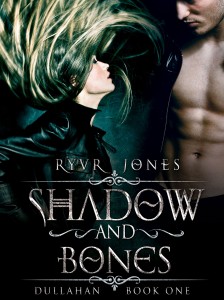 He wants to forget…

Rhys spent centuries alone, fighting the darkness he carries within. Forced to be a servant of Death, he is a dullahan—a soul collector, one of the creatures that originated the Headless Horseman myth. The only thing he wants—and can’t have—is to die. Until a strange, naked woman with no memories comes to his life, bringing back the painful past he buried long ago.

She needs to remember.

Tamerah doesn’t know who she is and doesn’t remember anything, except for this: she is Rhys’s last hope. If he doesn’t accept her help, the darkness will be unleashed upon the world and humankind will be destroyed.

Bound to each other by unknown forces, they need to uncover her identity and her connection to his past. Unexpected attraction flares between them… an attraction that is not what it seems.

While they deal with the smartest, most annoying boss in the history of mankind and fight an army of rotten souls, their quest for the truth will lead them to an ancient evil that has been waiting for centuries to be called again.

The darkness was awake under Rhys’s skin.

She should have let me die.

He signaled for another beer. Alcohol didn’t have any effect on him—the ability to get drunk was one of the many things he’d lost when he’d become a dullahan—but drinking was a way to pretend he was still human. At least for a while.

The bar was full of people, laughing and chatting, drinking and flirting as if they had all the time in the world to live. As if death wasn’t inevitably waiting for them at the end of the road.

Or maybe they were able to laugh, chat and flirt because they were sure of that fundamental truth—they were going to die one day. And maybe that’s why I can’t remember the last time I’ve laughed. Death wouldn’t come for him.

Instead, he’d been tricked into becoming one of its servants. A dullahan, one of the creatures that originated the Headless Horseman myth. His job as a soul collector was essential for humankind, but he hated everything about it, from his annoying boss to the stupid and inaccurate legends about his kind. Dullahans weren’t fairies, they didn’t usually walk around headless, and they’d stopped riding horses over a century ago, when the motorcycle had been invented.

The bartender, Sean, brought his beer and wiped the counter. “There you go, Rhys.”

Rhys wasn’t even his fucking real name, but it seemed to be popular nowadays and really, who gave a fuck? He certainly didn’t.

“What’s wrong?” Sean leaned sideways on the counter, looking at the crowd.

Fuck me running. Rhys was in a foul mood. What he hated most about his job was to fight the souls he collected, to see their panic and confusion, to know they didn’t have a choice. On top of that, the girl’s struggle had awakened the darkness. His control had been slipping lately, and it worried him.

But Sean couldn’t have known it. He didn’t know anything about Rhys besides the most basic things, the few bits he shared in order to live among normal people and pass as one of them.

“What makes you think something is wrong, and what do you care anyway?” Rhys’s voice was tinged with the bile filling his gut.

“You’ve been coming to the bar almost every night since I opened it.” Sean turned to him. “You’re practically part of the decoration, always sitting in this same damn spot. I can tell when you’re your usual, asshole self, and when you’re angry. Most people can’t, since you don’t talk to anybody except to tell them to get lost. But after all these years, I can. So, what the fuck is wrong?”

Rhys’s mouth opened, his jaw slack with surprise. Having lived as long as he did, very little caught him off guard. Pissed off with himself for being surprised, he let his anger fly. “Life’s a waste of time, that’s what’s wrong. Worse, my bartender is wasting his time grilling me. Do you think you’re my girlfriend or something?”

Instead of getting angry with the jab, Sean laughed. “Sorry, buddy. I don’t swing that way. Even if I did, you’re not pretty enough.” He winked.

You have no idea. If Sean knew what Rhys actually looked like, he wouldn’t be admitted to the bar.

“You’ll have to resign yourself to be friends,” Sean said.

“I don’t know, I was joking.” The bartender shrugged. “I guess we’re kind of friends. You’re slightly less of a jerk to me than to the rest of humankind. That has to count for something.”

Rhys stood. “I’m a customer. We are not friends.” He tossed some bills on the counter and walked away.

Stepping into the night, he turned his coat’s collar up and burrowed into it. He didn’t need protection from the cold—he just wanted to hide, to disappear.

As he walked down the ancient cobblestone street, he sneered. Friends. He didn’t have any friends.

They had all died a long, long time ago. And Rhys’s greatest regret was that he hadn’t died with them.

Farahnir was a small town, so Rhys soon arrived at the cemetery. The moon glowed faintly behind the clouds, the darkness turning the grounds beyond the iron fencing into a black void. The weak light from the street lamps whitened the long fingers of the trees near the fence, bared by the coming fall.

The town’s administration still employed a gravedigger instead of using modern machines, not only because human labor was cheaper, but because they didn’t want machinery messing up the two hundred years old graveyard.

He crossed the garden cemetery’s gates, not caring about the noise made by the old hinges. Officially, he was the gravedigger, but he was also the cemetery’s manager and gardener. He didn’t mind the work, and the job went perfectly with his soul collector duties. In fact, a lot of dullahans worked in cemeteries for that very reason.

As soon as he closed the gates behind him, low, pained moans sounded inside the grounds. Oh fuck. You’ve gotta be kidding me.

After being forced to drag the teenager’s soul kicking and screaming to deliver, plus the painful memories stirred by his conversation with Sean, he hadn’t thought his night could get any worse.

Right. Things usually went wrong, but particularly when he got the stupid notion that no, they couldn’t get any worse. It seemed the Gods got their kicks by screwing with him.

Another whimper reached him. Focus.

Enhanced senses were one of the few perks of his gig, so he followed the sounds with unerring precision. The moans led him to the ancient tree that marked the center of the cemetery. There was a woman lying on the ground, under the tree.

Without a stitch of clothing on.

The woman whimpered, her eyes closed.

Rhys took a deep breath. Don’t scare her. He crouched beside the woman and touched her shoulder. “Hey, are you alright?”

She opened her pale gray eyes and blinked, but didn’t move.

“Are you okay?” He tried to keep his voice as non-threatening as possible. “What happened to you?”

Seemingly unaware of her nudity, she looked around and sat up. Rhys straightened, putting a little distance between them, because he was acutely aware of her nakedness. She was beautiful, all pale skin and smooth curves and blond hair. He hadn’t appreciated the beauty of a feminine body since…he didn’t even know when. And he most definitely didn’t want to think about it.

Silent, the woman leaned against the tree and hugged her knees.

Rhys lost his patience. “Lady, I’m trying to be helpful here, but if you don’t talk to me, I’m going to either kick you out to fend for yourself, or call the police to take care of you.”

“Do you know who I am?” Her gaze went to him. “I don’t remember. I think I was supposed to remember, but I don’t.”

Just what I need. A gorgeous, naked, lost woman. On an already completely fucked up night. Rhys closed his eyes. If he believed someone would look upon him with even a hint of benevolence, he’d have prayed for patience.

Since he knew better, he gritted his teeth. “No, I don’t know who you are,” he ground out. “I should take you to a hospital.”

As if trying to remember him from somewhere, she tilted her head to the side and examined his face. “But I know you.” There was an eerie certainty in her voice, in her steady gaze. “I know your secret.”

And then Rhys knew, he just knew—everything was going to hell.